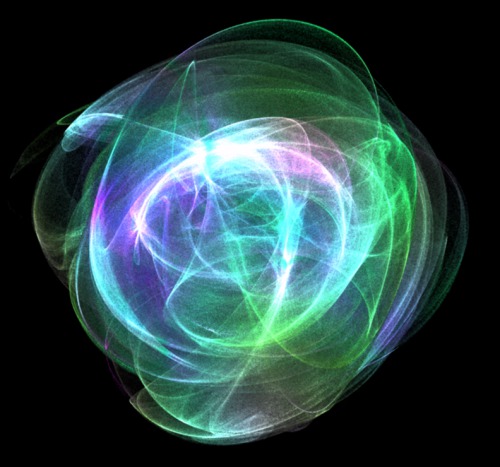 THE EDGE OF THE PARADIGM

As a species, we are constantly pushing for greater understanding of the universe around us. In order to conceptualize it, we form rational structures or paradigms that serve as the foundations of our understanding. This is very efficient since we don’t have to rethink the framework every time we need to decide something. Yet, if we continue to learn and grow, we eventually find the edges of those paradigms, limits of what they can achieve and what they can explain and accommodate.

I get the same “edge of paradigm” feeling when looking at science as well. Why does psychology and biology (as examples) continue to base their theories and research on a paradigm based exclusively on material cause (Newtonian Mechanics) when that paradigm has been obsolete for over a century?

When Newtonian mechanics reached its limits at the end of the 19th century, we pushed beyond it into the subtle but undeniably effective realm of quantum mechanics. There can be no doubt that the quantum model works; you and I use technologies every day that could not have been designed without an understanding of the quantum world. For example, computers, cell phones, and GPS all rely on the new model of quantum mechanics. There has never been an experiment that has shown even a single part of it to be false.

Despite its importance and correctness, and despite the fact that it’s a scientific paradigm that is over a century old, it’s my observation that the quantum paradigm is just now having an impact on our culture. Yet among physicists, this quantum paradigm may already be starting to yield to the next paradigm based on string theory. There are things it just can’t explain and reconcile, and though it’s worked well for us so far, there is a sense that it isn’t the final answer.

Quantum mechanics doesn’t invalidate Newtonian mechanics. Instead it recognizes its limits and pushes beyond them to a greater understanding of the universe. Similarly, we don’t expect the next paradigm to invalidate quantum mechanics either, but rather to go beyond it. In the same way, I don’t expect Holistic Capitalism to invalidate traditional capitalism, but go beyond it to something better, more elegant and refined, and ultimately more satisfying.

Jungian psychology and the movement that I would call “secular spiritualism” that has followed from it, found its roots in the advent of quantum mechanics. You see, Carl Jung influenced and was influenced by great physicists of his time, such as Albert Einstein and Wolfgang Pauli. His paradigm of Synchronicity was formed in direct conjunction with General Relativity and early quantum theory, and is said to have had a significant impact on Pauli’s later theories.

Synchronicity is an alternative explanation for the relatedness of things, that allows for simultaneous influence in both directions, or even multiple directions between multiple systems, as opposed to the strict cause–effect relationship of the material cause paradigm.

The idea of influence in all directions between multiple systems, of synchronicity, is central to the three axioms of Holistic Capitalism. 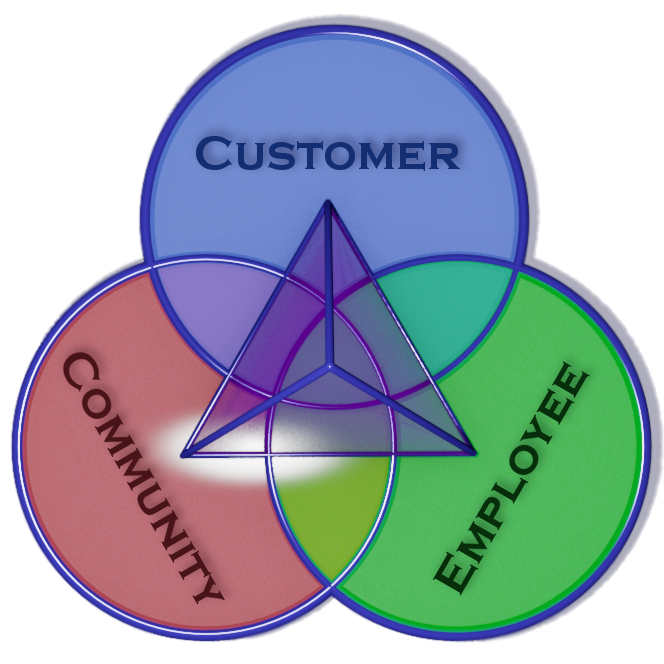 The Organization, or Capitalism itself, is represented by the pyramid. It can influence each of the circles, but they can also influence each other, independently of, and along with its influence.

The way your employees, customers, and community interact with and experience your organization are inseparably intertwined. It’s difficult to track that idea with traditional causality; you’d have to implement and track policies to account for six degrees of freedom in the system, and try to artificially balance each.

The alternative, using synchronicity, is much simpler. In essence, if your organization truly is a good place to work, a positive force in its community, and treats its customers with respect and honor, all three elements will simultaneously influence and balance each other, and create something that transcends the usual experience. It can turn customers into fans, employees into advocates, and your community into the cornerstone of your success. The caveat is, you can’t fake it. You have to truly be worthy in order for synchronicity to take effect. If you’re not, then synchronicity works both ways, and your organization and its reputation will quickly fall out of balance due to disconnects, tensions, and conflict. This is what I believe has happened nearly universally as traditional capitalism has run its course.